In addition to taking the coastal road that skirts around the edge of Taiwan, there are a few mountain passes as well. We planned to tackle the northernmost road that crosses the mountains, Highway 7, aka the Northern Cross Highway. Our route took us from Hsinchu to Luodong (near Yilan), via Guanxi and Baling, a total of about 160 km. The mountain pass topped out at 1170 m elevation, and Baling and Guanxi are spaced in a way that breaks up the climb nicely. 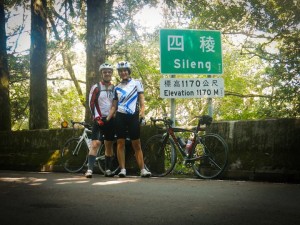 We are happy to be at the top of the Northern Cross!

Unfortunately, on the first day, Mike sustained a broken spoke not too long after we left town. We ended up backtracking to Jubei to visit a Giant Bicycle Shop for a quick fix. As always, service was prompt and they even sent us off with a spare free of charge! The bike shop added quite a few unexpected kilometers to a hot day, and I must admit I was happy to see our hotel. We had an excellent dinner and soaked our feet in the cold spring water works on the premises. I would certainly stop there again (here’s their website).

Our second day to Baling was probably the toughest day of the whole trip for me! We got breakfast at 7 am and were on the road by 8 am, but it really wasn’t early enough to beat the heat. For that, you have to be on the road by 4 or 5 am! The climbing started pretty much immediately, and our first section was fairly strenuous. There were many more cafes and lunch spots along the road than we expected, which was a pleasant surprise, and we stopped at one at the top of a climb for a break mid-day. There were a bunch of people already there who were very curious about us. We were able to have some simple conversation with them in Chinese, which was fun! Unfortunately, I hadn’t done a good job keeping fueled up before lunch, and suffered the consequences of the heat and hard riding for a little while. We coasted down a big hill after leaving the cafe, but the subsequent climb was a bit tough.

Once I had digested lunch and recovered a bit, the rest of the ride was fantastic. Being a Sunday, the narrow road was pretty busy, but the scenery was absolutely amazing. All in all, it was a good ride. The highlight was probably going around a corner to be confronted with a bunch of fellows using jackhammers to clean up a rock face, while cars drove underneath like it wasn’t happening!

Baling was a lovely little town, with a pretty suspension bridge and a few hotels and restaurants to choose from. We had quite a delicious dinner and some fresh peaches for dessert. Just like our stop the day before, the town was in the middle of a climb, so the next day we were going to start out going up right away. 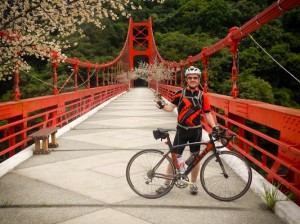 Mike on the pretty suspension bridge in Baling

On our final day on the Northern Cross, we completed our climb, coasted back down and then cycled across the coast into Luodong, a town that is part of Yilan county. While the day before was a physical challenge for me, this one proved to be a mental one. From other accounts of cycling this stretch, we knew we would be climbing, reach a summit, have a small descent, climb back up and then finally reach a section of massive switchbacks that basically go from the top of the mountain to sea level. We reached the first summit about 15 km past Baling (up a category 2 climb). The elevation is marked there on a big green sign, and I was pretty happy with how I felt going up. After this sign, you go through a little bowl, and not too much later, there is another elevation marker. ‘Is this it?’ We wonder. There’s a bit of a ripping downhill for quite some time, and then the road snakes around a bend…. and then goes back up (and up). Up! Oh no!

At least from my perspective, the second climb was pretty hefty. After seeing that second elevation marker, I wasn’t mentally prepared for another big climb. And to compound things, there are basically no spots to get food on that side of Baling. The only thing we saw that might have had something was an information centre in an ecological reserve, but we didn’t stop at it. Instead I ate everything I had in my pack before we reached the second (true) summit. We thought we’d find something at the bottom of the switchbacks into Yilan, but even there, there was one cafe part-way down the slope. Make sure you bring lunch!

The switchbacks into Yilan start at km marker 69 (Baling is at marker 56). The descent is awesome, and even with the switchbacks, the grade is quite steep. So steep, in fact, that the relief that you don’t have to go up anymore gets quickly replaced by an aching back and hands. It feels like you are going down forever, and yet, for most of the descent, the river below never looks any closer!

Once on flat land, there are a few places on the main road to eat, but we waited until we were across the bridge and into Sanxing before we had a good meal (I was famished). The B&B we booked was a little bit hard to find without a map (oops!), but some neighbours in the area kindly helped us find it. The owner, Miles, was really nice and as soon as we were washed up, took us out for lunch (牛肉麵, beef noodle soup)! He was also an avid cyclist, and had some great suggestions on how to explore Luodong on two wheels.

We had two days in Luodong, since I expected I would be exhausted after all the climbing. It was a really neat city, and we explored it a little bit on the bicycles the next day. 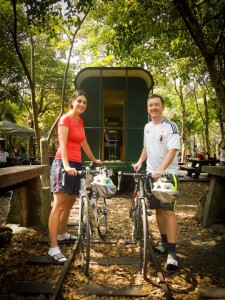 Thinking about riding the Northern Cross? Here are some things to consider: