I had gotten myself into quite a bind about how to spend New Year’s Eve here in Taiwan.  Part of me wanted to go to Taipei to see the fireworks at Taipei101.  The pictures and videos I have seen in years past have been amazing, and to date I have never seen fireworks launched off the sides of a building before.  However, with such spectacle comes crowds, an overloaded public transit system and expensive hotel rooms.  Friends suggested we go into the mountains for a view from above, but Mike and I just were not sure.  In the end we procrastinated until the only rooms left in the city were many hundreds of dollars a night, which was beyond our budget.  We thought about taking a taxi or the train up for the evening and then going home in the wee hours, but it had too much potential to go sour.  Plus, we had another, fantastic offer, right in Hsinchu City!  We decided to catch the celebration at Taipei101 on the news and see what our own town had up its sleeve.

Our fellow Canadian friend, Cynthia, just happens to live right downtown, where Hsinchu’s New Year celebrations were set up.  There was a huge stage with live music, a night market and lots of commotion in the hours prior to the stroke of midnight.  She has access to her roof, so we gathered with a bunch of other foreigners up there with a bag full of bottle rockets and some Gold Medal Taiwan beer to toast the New Year.  We had been told that Hsinchu’s fireworks display is none-too-shabby, and when the clock struck midnight, there were explosions EVERYWHERE!  The city provided a very nicely choreographed display of some huge fireworks, set off from 3 different locations behind the stage, and everyone else had brought some too.  Our building was literally surrounded by booms, sparkle and the smell of gunpowder.  The city display went on for about 10 minutes, and those lit off by other revellers continued late into the night.  What an awesome way to ring in the New Year! 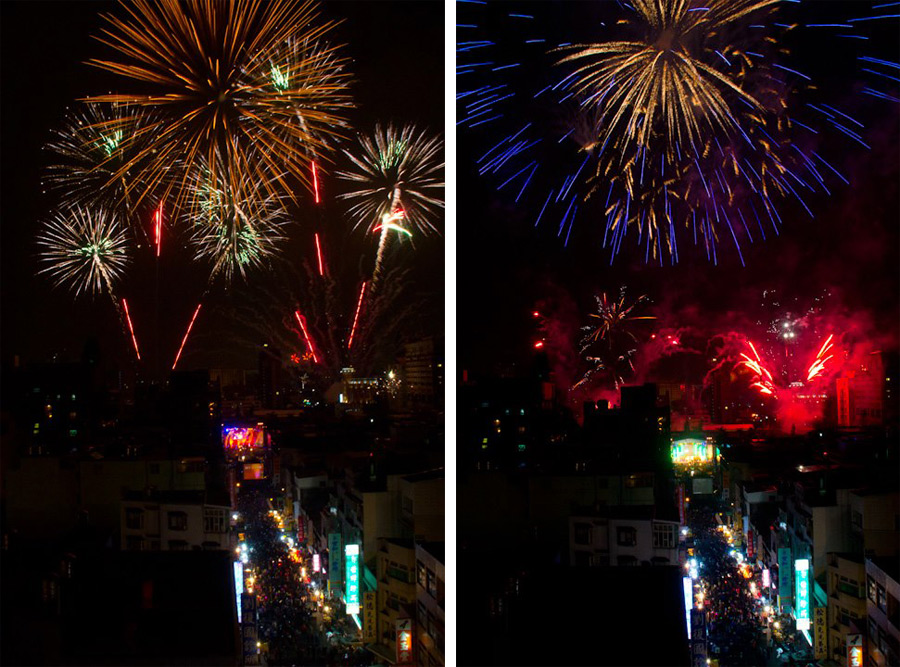