Although there were (very) minor earthquakes while I lived in Toronto, I cannot say I ever felt one. My experience in Taiwan, however, was a completely different story. Located near the ring of fire, earthquakes are very common there. In fact, it only took about a month to experience one! I was so excited, I even took a screen shot of the reporting online (the two events marked “new” in the image below): 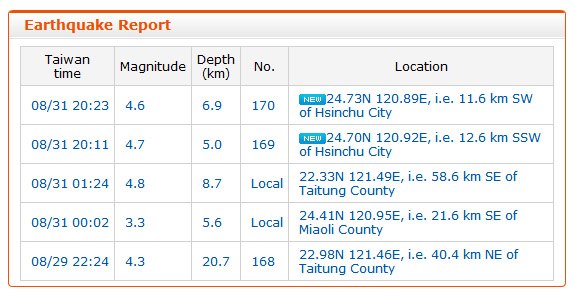 The first two earthquakes I ever felt!

Although a very minor event, I still remember it clearly. I was at home, on the 8th floor of an apartment building. The sensation was something akin to being on a very big boat, and the TV wobbled dramatically on its swivel stand. I must admit that I had not considered the proper actions to take in the event of an earthquake before the event, and I was quite relieved when the shaking eased off. I decided I should do some reading on earthquake preparedness for next time, when a second event occurred only a little more than 10 minutes later! Interestingly, Mike, who was out on a scooter at the time, felt nothing.

Although common events, the vast majority of the earthquakes we experienced were magnified by the elevation of our apartment and would have been difficult to detect at ground level. We also discovered that they are much easier to detect lying down than standing up, and it is quite difficult to discern a tremor from rough pavement when driving. Still, we experienced two events that were easily felt on the ground-floor in Hualien, a very seismically active area. This was a much different experience than being elevated – it was much rougher, and felt more like the Earth was cracking apart, rather than a gentle sway.

I am thankful for my easy earthquake experiences in Taiwan – thrilling and consequence free. According to the Central Weather Bureau, Taiwan experiences 2200 earthquakes a year on average, about 200 of which are felt on the ground.  And occasionally they are devastating.  Case in point, an earthquake registering 7.6 on the Richter Scale, that occurred on September 21, 1999, now known as the 921 Earthquake. The 921 Earthquake occurred along the Chelongpu Fault in Nantou County.  More than 2300 people were killed, and thousands of others were injured.  Thousands of buildings were damaged, and a 7 m waterfall was created by movement on the Chelongpu Fault. A high school lying on the fault line has been converted into the 921 Earthquake Museum where tourists can learn about earthquakes and disaster preparedness, and see some of the damage of the 921 Earthquake first hand.  We never made it out there, but I would try to go the next time I’m in Taiwan.

Mike and I enjoy a good hike up a mountain, and tackle them whenever we can.  Sadly, we were too early in the season to attempt Mt. Fuji, but we did summit Hallasan on Jeju Island, South Korea. Check out the graphic to compare some of the peaks we’ve summited, and the highest peaks in Canada and Taiwan.

Comparing the heights of various mountains we've summitted, and the highest peaks in Taiwan and Canada.

As part of our time resting and exploring Hualien, we rented scooters and drove up to Wuling and the Hehuashan pass. The drive from Hualien to the top is about 100 km of engaging driving and stunning scenery. The marble canyons and gushing river at the foot of the mountains give way to precarious and seemingly never ending winding roads and tunnels further up. Finally, the forest gives way, and scrub takes over. The last 10 km of driving or so looks like it could be Wales or somewhere in Newfoundland.  It is interesting to note that despite the altitude, the peaks are not perennially snow-capped.  Still, anyone curious about the white fluffy stuff can visit in the winter months and hope for a heavy snow fall.

At such a high elevation, the reduced amount of oxygen in the air noticeably affects the performance of your scooter. So much so that you nearly have to push it up some of the inclines! I didn’t notice the effects on my breathing while I was driving, but I felt light headed and winded the moment I parked and started walking. At the mountain top resorts, there were plenty of signs indicating medication for acute altitude sickness was available, and I can see why. Altitude effects are quite common over 3000 m, and Mike felt it too. I still can’t believe Mike cycled to the summit the very next day – a physical challenge even without the thin air!

Our time on Hehuanshan is the only time I have ever felt the effects of altitude, and it stands out as an amazing experience in Taiwan.  I certainly have a newfound respect for mountaineers!

The word ‘monsoon’ may conujure up images of warm tropical rains, however the term monsoon refers to a seasonal wind that reverses direction during the year. The summer monsoon is typically a rainy season, whereas the the winter monsoon is typically dry. This is because during the summer, the Asian landmass gets heated by the Sun. This creates a low pressure zone over the land that draws in wet oceanic air which results in heavy rainfall and potential flooding. In the winter, the system reverses itself. As the land cool down, a high pressure system develops and cold dry air is pushed out toward the ocean.

Seasonal changes in the East Asian monsoon area, from Yi, 2011

In Taiwan, this story is complicated by the Central and Xueshan mountain ranges. The winter monsoon is blocked by these mountains, resulting in cloudy weather and orographic precipitation over northern Taiwan during the winter months, while southern Taiwan stays dry. The summer monsoon is rainy throughought Taiwan, and can be divided into three components. First, there is a rainy period in May called 梅雨 (Meiyu = Plum Rain). This is followed by a break in the rain, and then another rainy period that extends from July to September.

The winds were a big player in our decision to travel clockwise around the island when we went on our cycling trip – depending on the season, it can be better to go one way or the other. The rains that come with the summer monsoon were also pretty neat. Every afternoon you could count on a downpour (better keep a poncho in the scooter boot)! Hsinchu is in the north, so we also experienced winter monsoon rains. These were a little less enjoyable since getting wet in the 10 degree weather would sometimes get a little chilly. I worked out early on that flip-flops were a great alternative to dealing with wet running shoes during the winter rains. Here’s a chart showing average monthly precipitation in Hsinchu, prepared using data from 1992-2010 from the Central Weather Bureau: 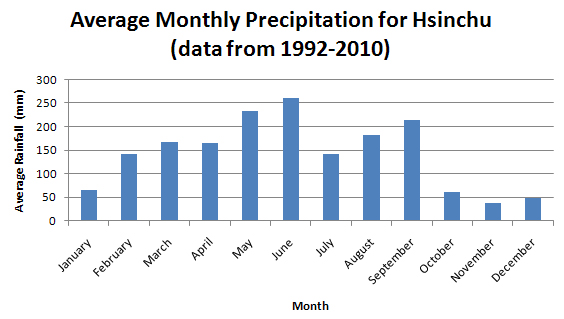 Average Monthly Precipitation for Hsinchu from 1992-2010. Data from the Central Weather Bureau.

Extra reading: some neat papers about precipitation in Taiwan 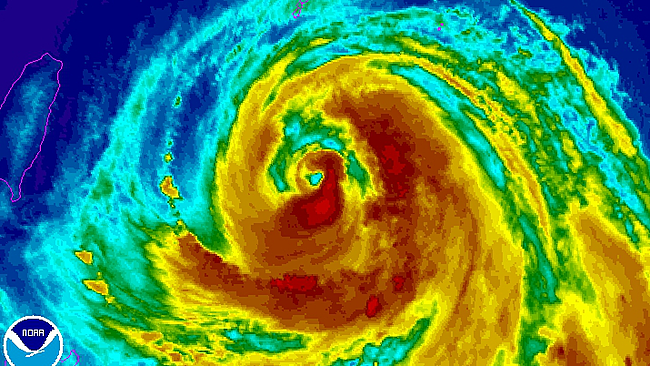 Typhoons are the the Northwestern Pacific’s equivalent to the hurricanes that occur in the Northeastern Pacific and Atlantic. They are formed when a number of factors (including a warm ocean and an existing weather disturbance) come together. When a typhoon makes landfall, it can bring high winds, torrential rain, huge waves and flooding.

Heavy rains and the occasional windy weekend were all the effects of hurricanes I ever experienced in Ontario, but I did experience Hurricane Igor in St. John’s, Newfoundland. While the storms themselves are similar to what Igor was, the frequency with which they arrive is amazing. There have only been 13 hurricanes that made landfall in Newfoundland since 1775, but Taiwan experiences about 2 or 3 a year! This, of course, means that there is much infrastructure put in place to deal with such storms, such as huge floodways and bridges that seem to be taller than one might think they need to be.

We experienced a few typhoons, the most serious of which was Soulik, which caused 4 fatalities, and among other things, the largest offset ever recorded at the mass damper in Taipei 101. For us, the winds seemed similar or less severe than those we experienced during Igor, but the amount of rainfall was absolutely astounding.

You can track typhoons near Taiwan through the Central Weather Bureau Typhoon Advisory page.

Check out excellent photographer (and my soccer teammate) Colin Peddle’s photojournal capturing the destruction of Hurricane Igor and a BBC summary of Typhoon Soulik (plus video).

Ever wonder about groundwater? Here’s a neat post with all the basics!

We’re all set up in Waterloo, Ontario. Mike is now a full time student in pursuit of a second degree at the University of Waterloo, and I am on the hunt for a job in environmental consulting.

It is nice to be back, but there are certainly things I miss about Taiwan, too. Still, one thing never changes… I’ll be cycling until it snows! 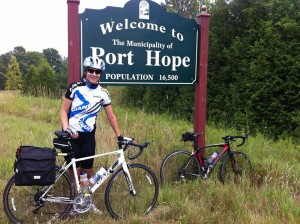 Cycling from Port Hope to Waterloo!

Many people recommend starting with the West coast of Taiwan and moving counter-clockwise when riding around the island. There are a few reasons for this – the higher population means more places to stop and fuel up and stay overnight, and more English speakers also helps with easing yourself into the Taiwan way of life, if you’re just visiting short term. It is also much flatter than the East, albeit most of the riding is along a pretty busy highway.

END_OF_DOCUMENT_TOKEN_TO_BE_REPLACED 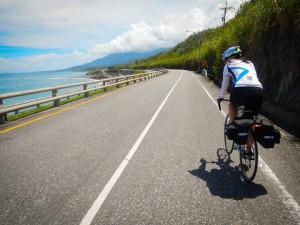 END_OF_DOCUMENT_TOKEN_TO_BE_REPLACED

In addition to taking the coastal road that skirts around the edge of Taiwan, there are a few mountain passes as well. We planned to tackle the northernmost road that crosses the mountains, Highway 7, aka the Northern Cross Highway. Our route took us from Hsinchu to Luodong (near Yilan), via Guanxi and Baling, a total of about 160 km. The mountain pass topped out at 1170 m elevation, and Baling and Guanxi are spaced in a way that breaks up the climb nicely.

END_OF_DOCUMENT_TOKEN_TO_BE_REPLACED

As I wrote before, the day after I finished teaching at Royal we packed up our bags and started to cycle around Taiwan, something referred to here as 環島 (huandao), meaning ‘circle the island’.

Our trip can be neatly broken down into three sections: 1) the northern cross highway over the mountains; 2) the east coast and 3) the west coast.  I want to write about it in some detail for any future interested cyclists, so I will break it down into three posts based on those divisions.  But before we get there…

END_OF_DOCUMENT_TOKEN_TO_BE_REPLACED

Nicole in a Nutshell 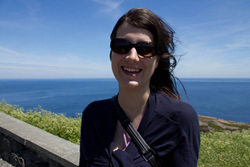